How to play natural objects as instruments When people learn that I am a musician inevitably their first question is "What kind of music do you play?" I'm never quite sure how to answer this because when I say that I make experimental music using amplified natural objects as instruments most people have no idea what I am talking about. So, in case you also have doubts about my sanity, here is a little background on how one can make music with things like rocks, water, feathers, bones and so forth, which is a big part of what I will soon be doing down in Antarctica.

There are many ways in which you can get items from the natural world to produce interesting sounds. Solid objects like wood, stone, leaves, feathers and bones may be bowed, brushed, rubbed, tapped, blown through, or set into motion in various ways. Materials such as water and sand can be dripped, drained, stirred, sifted, poured and filtered. These playing methods produce a great spectrum of sounds, from clear, pitched tones to gritty, textural noises, and each specific object or material contains its own unique voices. One of my favorite sounds, used in my work Ziran, are the muted flurries of delicate melodies made when flower petals are dropped on an amplified pinecone. Other sounds I am particularly fond of include the changing rhythmic patterns of wobbling rocks, and swooping sounds made by bowing dried leaves while changing their proximity to a microphone. You can hear some mp3 excerpts from my past compositions with natural-objects here. 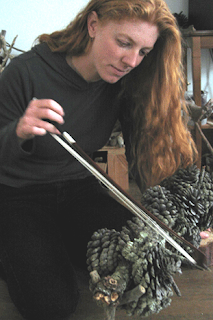 One of the most exciting parts of working with these unusual instruments is the time I spend impersonating a mad scientist. My search for music hidden within objects and materials from nature includes a lot of sound-making experiments. Sometimes I start out with a hypothesis (I think that if I bow this boa constrictor rib bone it will make howling wind sounds) and sometimes I don't (This is when I just try random crazy things, and I have found some of my best sounds this way). Often my experiments fail - meaning I discover nothing new, or yet another irritating sound (it's surprisingly easy to find sounds that resemble fingernails scratching on a chalkboard). Every so often I have what my father, an engineer and inventor, calls a eureka moment. For me this is when a fascinating new, and often unexpected, voice jumps out of a leaf or stone or whatever I am playing with that day.

Like many scientific explorers I use tools and techniques that have only recently become available in order to gain access to previously unvisited realms. Because many of the sounds that natural objects make are very quiet I use microphones and amplification to enable me to hear them, record them, and to play them live on stage. In Antarctica I will be using contact mics, condenser mics and hydrophones. I will write more about the specifics of my Antarctic field recording equipment in a future post (specialized gear is needed to record in the Antarctic Peninsula's cold, wet, and windy climate- mostly the kind of audio equipment used in location film shoots and nature field recording). I love exploring the micro-aural worlds that these tools reveal within a rock, pinecone, leaf, or bucketful of water, playing with the phenomena I find there, and building musical compositions out of these sounds. Aside from amplification I use no other other electronic effects in my natural-object music. It's not that I don't like reverb, flanging, delays, distortion and so forth, I simply don't need them to make this music. The sounds I find in these instruments are already so unusual and rich. 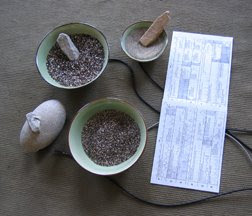 Once I find a collection of sounds that fascinate me it's time to start creating an actual composition. After all, just having a set of novel sounds does not equal music, it's what you do with them that makes them musical or not: all the details of how you play the instruments and how the sounds are put together. When I am composing I sculpt my sounds into musical forms that reflect, model, or demonstrate the theme of the piece. This may include the manner in which objects are played, organizational structures, which instruments or sounds are used in the piece (or building new instruments for it) and/or overall mode of creation. For example, my piece Umi from Music for Rocks and Water which was inspired by waves, swells and surf in the ocean, is constructed from wave-shaped musical gestures (on both macro and micro scales), the physical motions performers use when they play the piece are circular and sinusoidal, the sounds that comprise the piece resemble ocean surf, and the instruments are literally rocks and sand from a beach. You can hear an excerpt from Umi here.

I actually score out most of my compositions so that my ensemble and I can learn them and then perform the pieces live in front of an audience. I have developed my own system of notation to articulate how to play things like rocks, water and pinecones. It's a combination of graphics and text instructions, sometimes with sections of traditional music notation mixed in. Here is a little excerpt from the score to Umi. 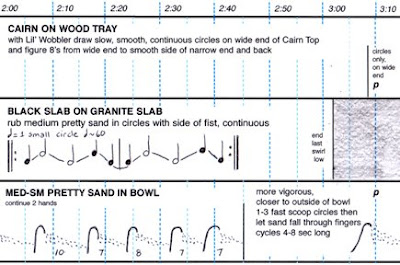 I should mention that all my natural-object instruments get names. I'm actually not usually that into naming things (for example, none of my cars have ever had names!) but when you start having a studio full of rocks and pinecones it becomes necessary to call them something just to help tell them apart. Then, also in scores I can specify exactly which thing to play when. So, above, the Cairn is a stack of three smooth granite stones, and the top one is named Lil' Wobbler because it is small, egg-shaped and wobbles. I admit most of my names are not that exciting, merely functional (that's probably because, as stated above, I'm not really the naming type). In the past there has been some confusion as several different stones all got dubbed "Grey Rock" and then I didn't know which one was the right Grey Rock for which piece. Thankfully the other players in my ensemble, currently A.L. Dentel and Karen Stackpole, are helping with the naming duties these days.
Posted by Cheryl E Leonard at 8:38 AM