I'm busy putting together a CD of my favorite undeveloped field recordings from Palmer Station, which I expect to release in January 2010. More details coming soon! 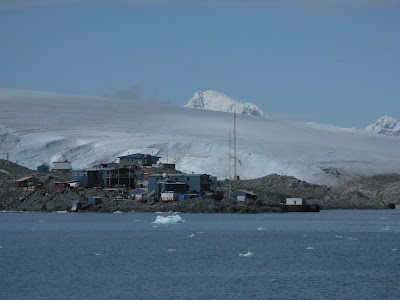 Once the field recordings CD is complete I'll focus on constructing additional Antarctic-object instruments, and writing and recording the rest of my set of Antarctic music compositions. I have three pieces finished so far, but I think there will be ten total. I'll be performing these pieces live in a series of concerts throughout 2010. Performance info will be posted here as it becomes available.

In the meantime, if you have a hankering for some stormy/icy/polar-type sounds I suggest you take a listen to the following recordings:
Jana Winderen- Heated
Jana Winderen- Submerged
Chris Watson - Weather Report
Chris Watson & BJ Nilsen - Storm
Douglas Quinn - Antarctica

And I very highly recommend Meredith Hooper's book The Ferocious Summer: Adelie Penguins and the Warming of Antarctica.

Cheers!
Posted by Cheryl E Leonard at 3:11 PM No comments: