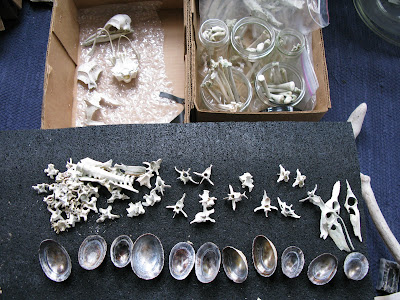 I've been experimenting musically with the limpet shells and Adelie Penguin bones that I brought back with me from Antarctica, working to uncover the palette of sounds they contain.

My first exciting discovery: the limpet shells can be bowed. Played this way they produce clear, singing, high tones, similar to bowed glass. Each individual shell has its own pitch and I've picked out a set of shells/tones that (to my ears) work well together.

I'm eager to use the shells in a composition, but it's pretty tough to bow them while they're just lying on a table, so first I have to figure out a good way to mount them. This is a bit tricky 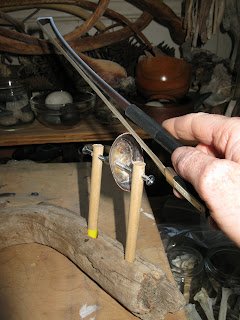 because I don't want to do anything destructive (like drilling) to my limited supply of irreplaceable shells. Also they resonate best when held/clamped in the center of the shell (imagine a tiny cymbal), otherwise the sound vibrations are dampened and only a very dull airy tone results.

My first attempt at mounting a limpet shell worked, but was pretty ugly visually. It's just too mechanical for my taste. 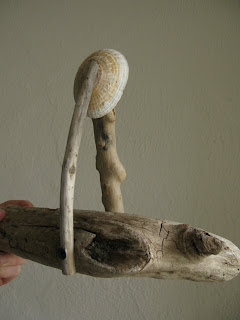 I'm much happier with yesterday's second attempt, which is more organic-looking. What you see here is just a prototype. The finished instrument will have 10 shells, all mounted in a row along/above one large piece of driftwood. Time to go back to the beach in search of more thin, curved pieces of driftwood to hold all the shells in place...


Yes, I know there are no trees in Antarctica, but I've decided to use driftwood in constructing my instruments anyway. I considered other materials (metal, plastic, ceramics, non-penguin bones), but none of these would have originated in Antarctica either, and most options seemed even further removed from the natural world. At least driftwood is an organic material. It is easy to work with and the bleached forms blend well visually with the limpet shells and penguin bones. Also I like the fact that driftwood comes to us via the sea. I am reminded that the Pacific (which my local specimens travel through) extends far to south, down to where the Antarctic Circumpolar Current connects and mixes its waters with those of the Atlantic and Indian Oceans. It's also fun to think back in geological time to the eras (40 million plus years ago) in which trees did grow in Antarctica. 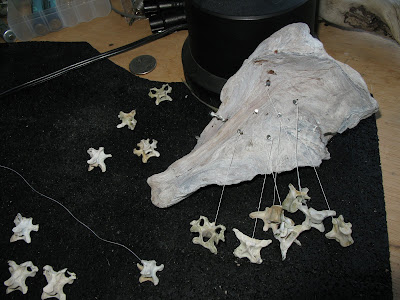 One of the instruments I am making with my Adelie Penguin bones is a vertebrae mobile. The suspended bones make delicate muted clinks, similar to some of the sounds I heard small bits of brash ice produce. Examined up close, the vertebrae have intricate structures and are quite beautiful. Many of them bring to mind tiny alien spaceships and I like the idea of taking bones from a flightless bird and making them float in the air. 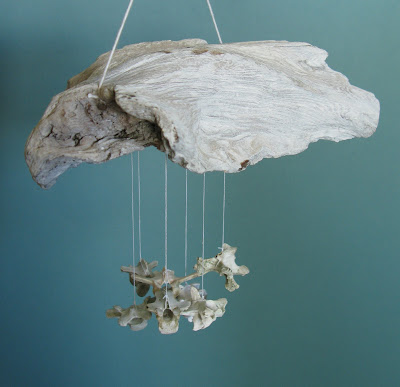 This is what the mobile looks like so far, but it's not complete yet. When finished there will be 20 or more suspended vertebrae.

And now, back to work!