The Coracoids - Adélie penguin coracoid bones mounted in driftwood and amplified via a contact microphone wedged in the wood. The coracoid is part of the penguin's shoulder girdle and is the pivot upon which its wings turn. I have been bowing the coracoids to produce eerie, howling sounds in my new piece White on White, which evokes the rapid decline of the Adélie colonies near Palmer Station. 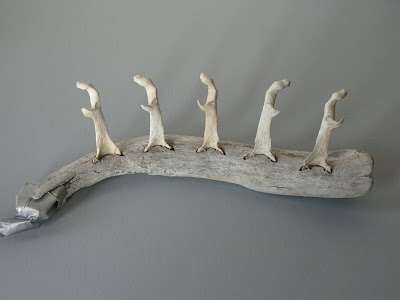 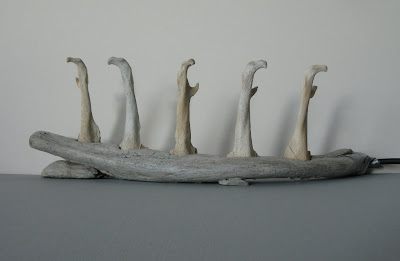 The Octobone - is constructed from Adélie penguin femurs and tibias, again mounted in driftwood. The instrument is miked via a hydrophone embedded inside the underside of the wood. We have been playing the Octobone percussively and making sounds that blend with recordings of brash ice melting underwater. 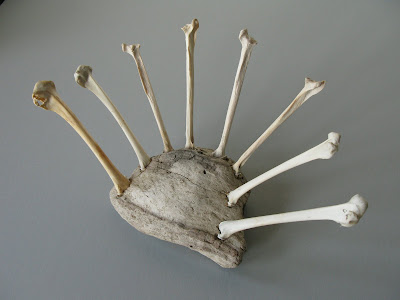 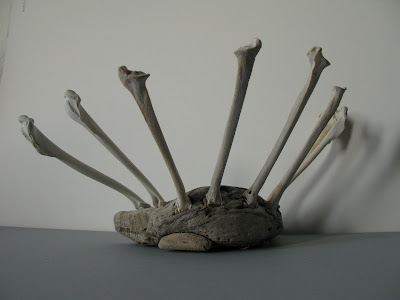 I didn't want to damage the bones in either of these two instruments (if they broke, replacing them would likely take several years and a lot of grant-writing). So, instead of screwing or gluing them into the base, the bones are fitted into holes carved in the wood, and strapped and wedged in place with thick thread and tiny shims. After a few carving mishaps that resulted in minor injuries I discovered work gloves and refined my technique. Now my woodworking should involve less cursing and blood. Yay! More bone instruments coming soon.
Posted by Cheryl E Leonard at 10:10 PM No comments: