This year we've been having a very strange winter in Northern California. It has been extremely dry, and between mid-November and mid-January almost no snow fell up in the mountains. Many roads in the high Sierras remained open long after their normal closing dates, including the Tioga Pass Road, the part of Hwy 120 that crosses the Sierras through Yosemite National Park, running past Tuolumne Meadows and over the 9943' Tioga Pass. In a normal year Tioga Pass Road closes in November and is accessible only to skiers and snowshoers until May or June, but this winter it remained open until January 18th. I was even able to go rock climbing in Tuolumne Meadows during both the New Years and Martin Luther King Jr. holiday weekends! 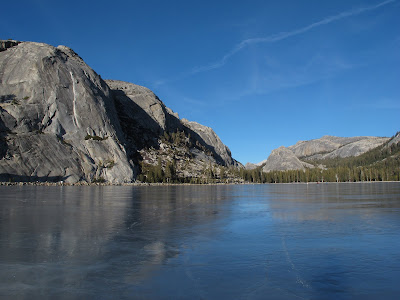 While the lack of snow has been (and as of this writing, still is) a huge disappointment to skiers, it allowed people easy access to the high mountains in the middle of winter and enabled them to enjoy some unique recreational activities and unusual sounds. Lakes and rivers in the high country were frozen, but not buried in snow, and conditions were excellent for ice skating, ice climbing, ice hockey, ice bowling, para-skating and other frosty shenanigans. 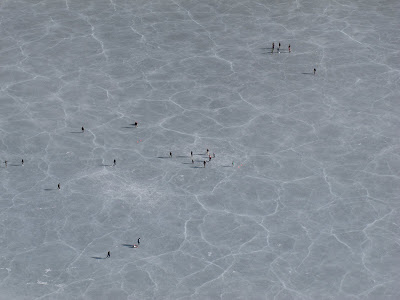 When I arrived at Tenaya Lake (at 8150') on New Years Eve day, the lake was covered with people, some fearful and cautious, some exuberant and carefree, but all marveling at the thick layer of ice on its surface. 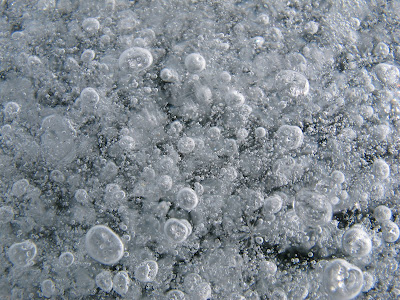 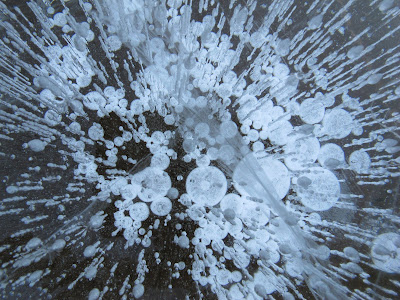 Furthermore, as the ice warmed in the late morning sun it made a variety of strange, loud sounds that echoed off the surrounding granite cliffs. Booming, cracking, whomping, thumping, twanging, and zinging all emanated from the lake. Sometimes I was startled and frightened as I felt vibrations directly underneath my boots, while other low bass sounds originated from distant parts of the lake and produced mesmerizing stereo effects.

I returned to Tuolumne Meadows two weeks later on January 13th with proper recording equipment, my friend Valerie Zimmer who works as a geologist in Yosemite (check out her blog), and Katy from the National Park Service's Natural Sounds Program. Val had already been recording frozen lake sounds for several days and reported that noises were happening as the ice warmed in the morning from about 9am until noon, then the lakes were quiet for a few hours in the middle of the day, and later whomping and cracking resumed in the late afternoon while the ice cooled. 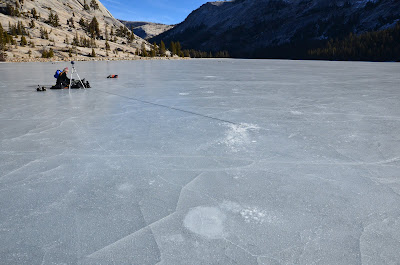 Hoping to avoid noise from people and traffic, we arrived at Tenaya Lake on Friday morning. We chose a location about in the middle of the northern side of the lake, near the Murphy Creek trailhead, and a couple of hundred feet out from shore. Around 9am, just as sunlight started to warm the ice, I began recording. I used condenser microphones to capture the airborne sounds, and Val drilled holes in the ice with a giant drill bit so we could plant hydrophones in the ice itself. Tenaya Lake's ice was 7-8" thick and I found that I got the best sound when the hydrophones were placed about halfway down inside their holes (The holes filled up with water as soon as the drill broke through the bottom of the ice, and then began freezing closed again around the hydrophones). 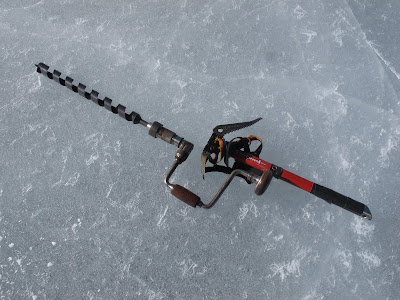 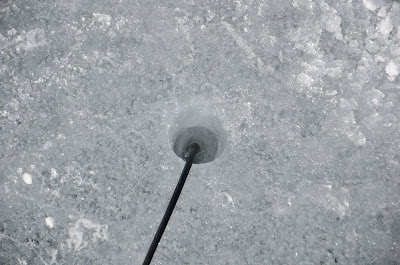 About the sound samples: For maximum enjoyment I recommend listening on high quality headphones or speakers. Since these are somewhat-large .wav files, if you have a slow internet connection it may take a few seconds for the audio to start playing after you click on a link.

In the air at 9:35 am
(Senheiser MKH 40 and MKH 3o microphones pointing southwest, Sound Devices 702 recorder)

In the ice at 10:15 am
(2 Aquarian Audio H2a-XLR hydrophones embedded in the ice about 75 feet apart, Fostex FR2-LE recorder)


Eventually there was too much extraneous noise coming from cars, ice skaters and sightseers to capture any high-quality audio, so we decided to hike up to Lower Cathedral Lake in the hopes of recording the afternoon ice freeze undisturbed, or at least only interrupted by airplane noise. 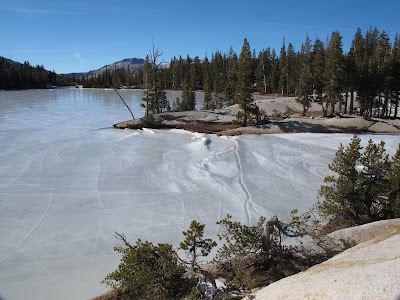 Lower Cathedral Lake 1/13/2012
Luckily we were the only people up at Lower Cathedral Lake (9290') that day and, although the lake was relatively quiet when we first arrived, its grumblings grew louder and louder as the afternoon progressed. I set up near the eastern side of the lake, placing one pair of hydrophones nearer the shore (note the high-end crackling from shore ice in the recording), and another pair, plus my open-air mics farther out on the ice, closer to the lake's shady southeast corner.

In the ice far from shore at 3:35pm
(2 Aquarian Audio H2a-XLR hydrophones embedded in the ice about 75 feet apart, Fostex FR2-LE recorder)

In the ice nearer the shore at 4:02pm
(2 Aquarian Audio H2a-XLR hydrophones embedded in the ice about 75 feet apart, Edirol R44 recorder) 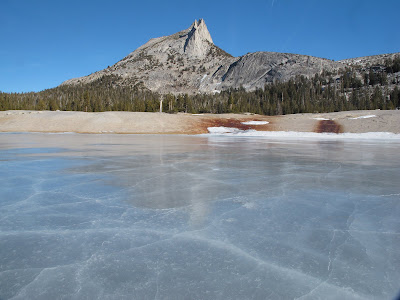 Two days later friends and I stopped at Tenaya Lake again on our way home. Although it was cold and windy that afternoon there were still quite a few hardy folks out playing on the ice and plenty of cars driving through the area. The lake was booming and fracturing loudly but trying to record in the air seemed completely futile. It was still fun, however, to capture the ice sounds via hydrophones, and lots of curious people skated or slid up to me to have a listen. I was set up several hundred feet out from the northern shore of the lake, underneath the middle of Stately Pleasure Dome.

In the ice at 4:04pm (not much extraneous noise)
(2 Aquarian Audio H2a-XLR hydrophones embedded in the ice about 75 feet apart, Sound Devices 702 recorder)

In the ice at 4:07pm (with wind and ice skating sounds)
(2 Aquarian Audio H2a-XLR hydrophones embedded in the ice about 75 feet apart, Sound Devices 702 recorder) 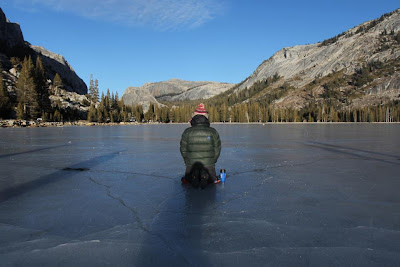 That's it for now. I hope you enjoy these unique ice sounds, even though they are not from Antarctica!


Update 1/8/19: Music composition made from these sounds now available
I developed a long (21:27!) music composition, Frozen Over, out of my Yosemite frozen lake field recordings, plus sounds from gongs, bells, rocks, and shells. It's included on the album Watershed and is available via Bandcamp as a digital download or on CD. You can also get the piece or the album from iTunes, or CD Baby. Happy listening!

For more lake ice sounds and information check out:

Free download of sounds of snow and ice by various artists:
http://www.gruenrekorder.de/?page_id=107

Valerie Zimmer on fun things to do on frozen lakes
http://rockslapper.blogspot.com/2012/01/amazing-alpine-ice-tenaya-lake.html

Russian scientists have drilled down to the water of Lake Vostok, which has been sealed away from the outside world for many millions of years. It should be very interesting to see what they find down there!