Oona Stern, my compatriot and Artboat Co-Captain at Palmer Station, has a solo exhibition of her Antarctic work up right now at Westchester Community College in New York. If you are in the area, I highly recommend that you go see it!

Also, I'll be speaking about my Antarctic music and doing a short performance at the opening reception next Wednesday... 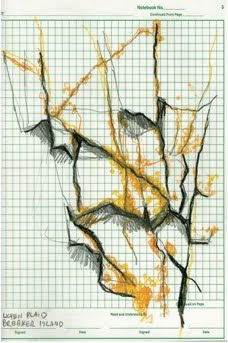 In January 2009 Oona Stern traveled to Palmer Station in Antarctica as a fellow with the National Science Foundation's Antarctic Artists and Writers Program. The study of ice and its structures was the focus of Stern's Antarctic research, and the reluctant naturalist is the first solo exhibition of work based on her residency.

A gallery talk with Oona Stern will be held on Wednesday, February 2, from 11am – 1pm.
Special guest Cheryl E. Leonard, sound artist and composer, will perform music also developed in Antarctica.


In 2009 I was in Antarctica with the National Science Foundation’s Antarctic Artists and Writers Program. My focus was the study of ice and its structure. I returned with dozens of field drawings and over 4000 photographs. Previously my work had been inspired by architecture, construction and (sub)urban environments, resulting in public installations with a range of materials from decking to advertising posters. Nature appeared with a small “n” - a context for architectural practice, nothing more. Now, with Antarctica as source material, my work has shifted content, and Nature plays a leading role. I find myself examining natural patterns and structures as I did previously in an urban context. In my drawings the plaid-like patterning of glaciers and other ice forms has become an obsessive exploration, and in developing a visual vocabulary of nature’s frozen grids and plaids, I am echoing my earlier architectural iconography. The first sculptural work shows a dramatic shift in scale from room-sized to table-top. It is only with time that projects on a more environmental scale will take shape.

the reluctant naturalist is a survey of these varied practices. Field drawings of the Antarctic Peninsula and Palmer Research Station, collages, table-top icebergs, a room-sized mural all reflect my attempts to translate Antarctica’s richness into my own vocabulary. It is in its early days yet, and the show reflects a process; these assorted pieces are the seeds of work that I will be building on for years to come.